You’ve been to the Colosseum and the Forum but your hunger for ancient Rome isn’t totally satisfied yet? Then we recommend you to pay a visit to the Circus Maximus.

About one kilometer away from the Colosseum, the Circus Maximus is today a large green area where we romans go for a walk, or walk our dog during the day and we go for concerts, show and mass events during the night. In the past it used to be Rome’s largest arena that hosted games and horse races. 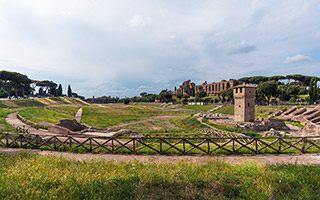 Largest arena ever built. 600-meter long and 140-meter wide, Circus Maximus is the largest venue for shows that was ever built. It is the largest and oldest circus in Rome. People flocked in in the IV century b.c. to watch chariot races. Back then its capacity was up to 250000 people, that seated on wooden benches, would holler their ooohs and aaahs as the vehicles sprinted through the narrow curves of the circuit. Circus Maximus golden age came after 64 a.c. when Traiano renovated it, after the large fire that devastated the city. The surrounding area was full of life: according to evidence that turned up during recent diggings, visitors and fans packed the area that featured stands, shops, and taverns. Many years later the activities died down to the point of disuse in 549 a.c..

Visit the archeological area. After 6 years of renovation works, on November 17 2016, the archeological area of the Circus Maximus has been open to the public. Coming from Piazza Capena, you access the galleries that took tothe stands of the arena, and you can visit the rooms that used to feature small shops and the base of the Arco di Tito. Furthermore you can enter the Torre della Moletta, built during the XII century and walk up to the next floor to enjoy a panoramic view of the Circus Maximus.

Lack of care. Many romans (and many tourists) complain about the Circus Maximus level of care, or lack thereof, We really think that it would be important to increase the value of this massive piece of history. The opening of the archeological area is a step towards the right direction. We really hope that this is a betterment in terms of fruition of the area.

Local products. Located in via di San Teodoro, 74A is the Circus Maximus market, born thanks to an idea by Campagna Amica, a foundation that promotes the excellence of the italian farming production chain for local products. In the market, the producers sell products farmed in the roman countryside directly to the consumers: Cori’s artichokes, roman broccoli, puntarelle, Trevignano’s tomatoes, Gaeta’s olives, Campoli’s truffles, cheese such as Columella’s caciofiore and marzolina, honey and meats such as beef and pork. You can also buy fresh milk there. The market is open on Saturdays from 9 am to 6 pm and on Sundays from 9 am to 4 pm.

Concerts. Nowadays the arena mainly hosts big events such as concerts, shows and so on. There’s a reason for it: it’s the largest area available in the heart of Rome. So it’s been picked as venue for big concerts such as Bruce Springsteen, David Gilmour and Rolling Stones to name a few.

The area is open to the public so you can walk freely in the park and enjoy the sunshine if the weather’s nice. You can sit down on the grass and have a sandwich. But please don’t litter. Throw away the trash in the garbage bins.

The park is always open. The archeological area is open on Saturdays and Sundays from 10 am to 4 pm, last entrance at 3 pm. From Tuesday to Friday you must book your visit.Call the 060608 between 9 am to 9 pm to book your visit.

Subway: it’s the fastest way to get to the Circus Maximus. Take the B line and get off at Circo Massimo.