You’ve come to Rome more than once. You have seen pretty much everything there’s to see. So if you’re a little tired of visiting the historical downtown once again, well maybe it’s time for you to take a stroll in the picturesque Coppedè neighborhood. Few minutes away from downtown, located between Via Salaria and Via Nomentana, there’s a residential complex formed by 26 low rise buildings and 17 small houses, that enchants visitors thanks to its mix of liberty style, art decò, baroque, gothic along with medieval and ancient greek features. The neighborhood was designed by the architect Gino Coppedè  and built between 1913 and 1926. It’s truly a fairy-tale oasis right in the middle of the city. 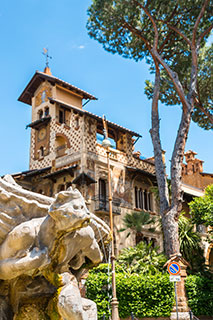 The Fountain of Frogs

Ever changing environment. Coppedè’s landscape changes its appearance depending on the time of the day and the climate: it’s romantic and fairy tale-like during the day. It becomes gothic and haunting during the evening. And finally its features change to frightful and unsettling during foggy nights. Actually the horror movie director Dario Argento chose Coppedè’s scenery to shoot two of his most famous films: Inferno and The bird with the crystal plumage.

The best access point. Ideally the tour starts at the corner of via Tagliamento and via Dora where, under a big arch that connects two buildings, a huge chandelier made of wrought iron hangs. After admiring the images depicted on the arch, continue toward Via Dora and reach Piazza Mincio, where you will notice immediately La Fontana delle Rane (the Fountain of Frogs), a beautiful spring adorned with 12 statues of frogs.

Piazza Mincio. From the neighborhood focal point, right around the Fontana delle Rane, you can admire some beatiful buildings: the Villini delle Fate, the Palazzo del Ragno, the Ambassadors’ building and the nameless building. The Villini delle Fate (Fairy Villa) distinguish themselves for being totally asymmetrical and built with different materials such as travertine, brick, marble, terracotta and glass. The buildings have three separate entrances. From the square you can read latin writings: “Domus pacis” (house of peace); “Domino laetitia praebeo” (I offer joy to the master); “E petra firmitas, ex arte venustas” (From the stone the solidity, from the art the beauty). Via Aterno’s side is dedicated to Florence and features portraits of Dante and Petrarca. Via Brenta’s side is dedicated to Venice and features San Marco’s lion and a deptiction of a clipper. At street number 4 rises the Palazzo del Ragno (Spider building), named after the big spider depicted on the gate. Its facade is covered by depictions of dragons, monsters and lions. This building celebrates labor. In fact it depicts a cavalier and the writing “labor” (latin word for labor). The Ambassadors’ building form the block between via Tagliamento, via Arno, via Tanaro and via Brenta. At street number 2 rises a building that depicts the scenic design of Cabiria, silent film of 1914.

Look up. Coppedè doesn’t end with piazza Mincio. It’s worth to extend your walk to the small internal streets. So look up as you walk so that you don’t miss out on the details: buildings covered with ivy, front doors adorned with simbolyc representations and decorations.

Which itinerary? You can find some useful suggestions about the itinerary on the web. Over the last few years a few private agencies have been promoting guided tours. If you have enough time it’s worth to get deep into the secrets of the neighborhood.

The walk around the Coppedè quarter is short. So you won’t need to bring much in your backpack. Don’t forget your camera though.

Visit Coppedè during the day if you want to soak in a fairy-tale like environment. If you’re more into the gothic vibe go there at night..

There are no costs involved unless you want to go on a guided tour.

Tram: From Policlinico subway stop take the 3 and 19 lines.