Saint Mary Major Basilica is dedicated to the worshipping of the Holy Mary. The Church is one of the main four Papal basilicas in Rome. The other three are Saint Peter’s Basilica, Archbasilica of Saint John Lateran and the Basilica of Saint Paul Outside the Walls.

Thanks to its status as a papal basilica, a papal altar is located inside. Only the Pope and few other priests can celebrate the Eucharist. The Church also has a Holy Door which the Pope opens during the Holy Year. Passing through the Holy Door may allow you to earn the plenary indulgence which means you are forgiven for all the sins you’ve committed throughout your whole lifetime.

The cascade of white petals. On August 5th the Basilca celebrate the “miracle of the snowfall”: a cascade of white petals falls from the church’s coffer ceiling creating a surreal environment. This celebration commemorates a story that was told by many christian storytellers. The story is about a noble roman child-less couple that decided to donate part of their belongings to build a Church dedicated to the worshipping of the Holy Mary. On the night of August 4, 352 a.c. they had a dream of the Holy Mary. In the dream She told the couple to build a Church right where the next morning they would have found fresh snow. Papa Liberio had the same dream. The next morning snow fell from the sky (in August!) and the couple decided to go straight to meet the Pope to tell Him about the dream. So the couple decided to start the building of the Church. At first it was named Santa Maria della Neve (Holy Mary of the snow) or Basilica Liberiana, named after the Pope Liberio. 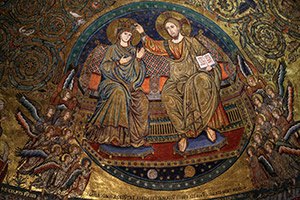 The cycle of the mosaics. If you can’t be in Rome on August 5th you can still enjoy the wonderful V century mosaics that decorate the middle aisle and the Arc of Triumph. They were put together under Pope Sisto III. The mosaics depict four history cycles dedicated to Abraham, Jacob, Moses and Joshua along with stories that do not follow a chronological order. Another cycle of mosaics is dedicated to the life of Jesus Christ. If you want a sneak preview you can take the virtual tour on the Saint Mary Major Basilica's website.

Christian Rome itinerary. Do you wish to spend a day visiting the holy spots of Rome? You can follow the itinerarary suggested on Rome’s webiste for the Jubilee, which takes you from San San Giovanni in Laterano to Saint Peter’s, passing through San Clemente, San Pietro in Vincoli, Saint Mary Major and Santa Cecilia in Trastevere. You won’t regret it. 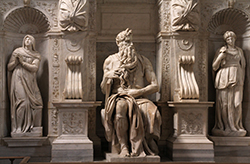 Dress Code. In churces access is forbidden if your arms and legs are not properly covered. Pants or long skirts are required to get in. Your shoulder also must be covered. Otherwise you will be denied access to the Church. So trust us, follow the dress code and you won’t miss out on all the art that is hidden into the thousands of Churches of Rome.

Admire Michelangelo’s Mosè (Moses). If you feel like taking a 10 minute-walk, before or after visiting the Church of Saint Mary Major, you can visit the Church of San Pietro in vincoli located in Piazza San Pietro in Vincoli, 4A. Here you can admire the Michelangelo’s Mosè (Moses) and see the chains that tied St. Peter during his imprisonment in the Mamertino prison.. The Church is open from april to september from 8 am to 12:30 pm and from 3 pm to 7 pm. From october to march it closes at 6 pm.

Are you hungry? You may want to take a break and have lunch in one of the many spots located in the Rione Monti. There’s plenty to choose from. If you’re in a hurry and want to spend just a few Euros you can have a piece of pizza or else have a sandwich at Panificio Roscioni, in Via Principe Amedeo. Instead if you want to sit and are curious enough to try creative food, you may want to stop at L’Asino D’Oro, in Via del Boschetto. You can have small portions of antipasto, pasta, second course and side dish and a bottle of water with only 16 Euros.

During the summer we recommend you to bring with you a scarf or a jacket to cover your shoulders. 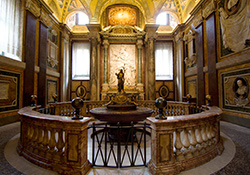 Free entrance. Access to the Church is free of charge.

Underground. The guided tour to the archeological area is 5 Euros (4 Euros for students and people over 65). You are required to book your visit through the Church Museum via phone/fax a at 0669886802, o via e-mail, at the address [email protected].

Guided tour. The guided tour of the Church costs 5 Euros and it’s scheduled every day from 3 pm, 4 pm and 5 pm