When you think of Villa D’Este, the first thing that comes to mind is water. This 30 thousand square-meter villa features 50 fountains, 255 waterfalls, 250 water gushes, 100 tubs and 60 springs. All this in a huge garden that features 150 centuries-old plants, 15 thousand perennial plants, and 30 thousand seasonal plants.

If you’re in Rome and you have some free time, spend a day in this beautiful Villa of the renaissance located in Tivoli, 30 km away from Rome. 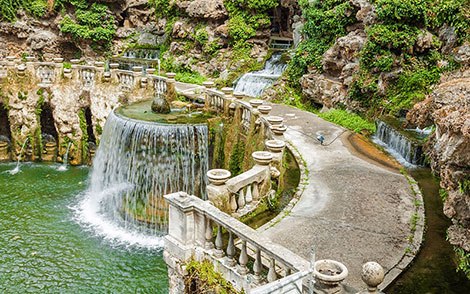 Magical charm. Once you get in you will be in ecstasy and you won’t want to leave. Our recommendation is to tour the inside of the Villa with its paintings, and later get out and take a stroll through the gardens.

The fountain of the organ. The main attraction of the Villa, the organ, is turned on every two hours, starting from 10:30 am. Don’t miss the show.

The Hundred Fountains.  Walk through the boulevard that is flanked by hundred gushes of water on three lines, one over the other. The first two lines are formed by masks of anthropomorphic shapes. The third line is made by sculptures of lilies and eagles. The fountain appears in several movies, 1959’s Ben Hur to name one, in the scene of the feast.

The Oval Fountain.  Due to its insurmountable appeal, this mountain is nicknamed the queen of the fountains. It’s named after the oval shape of the big tub where all the water falls in. The spectacular effect is created by groups of rocks that revoke the Tiburtini Mountains, source of the three rivers represented by mythological statues: Aniene, Erculaneo and Albuneo. The fountain of Pegaso stands above the structures

The Fountain of Neptune. It’s the most spectacular and majestic fountain in Villa D’Este with its gushes that fly high in the air.

Nightly opening. From July to September, on Fridays and Saturdays Villa D’Este remains open until midnight. Last tour starts at 11 pm. The lights turn the fountains and the gardens into magical sightings.

Villa Adriana (Hadrian's Villa). Once you get to Villa D’Este, it’s worth to take a tour of the enchanting Villa Adriana, which was designated one of UNESCO's World Heritage Sites in 1999- Villa Adriana is located 7 km away from Villa D’Este. The area spreads for 40 hectares and features apartment buildings, pavillions, thermal baths and gardens. The Canopo’ structure is quite famous. It depicts the segment of the Nile river that connected Canopo’ to Alessandria and that was well known for its parties.

Cloudbursts and closings. In case of heavy rain falls, due to the enlargement of the Aniene river, the supply of water to the fountains may be suspended. Occasionally, the Villa might be closed. Unfortunately in some case refund is not available if you booked your ticket in advance.

Hungry? If you don’t want to stop at the Villa cafeteria (which is being closed recently anyway due to renewal of the license) you can bring a sandwich. Picnics are forbidden but eating a sandwich quickly and quietly is permitted. Otherwise, stop by one of many restaurants nearby.

The Villa opens at 8:30 all year long. The closing time varies from 5 pm to 7:45 pm depending on the sunset time.

The Fountain of Neptune

Free entrance The first Sunday of every month.

Car. Villa d’Este is in Tivoli, 30 km away from Rome. The best way to reach it is by car. Take the A24 highway (exit: Tivoli) or take Via Tiburtina.

Bus. You can take a Cotral bus from Ponte Mammolo subway station that goes to Tivoli. The fastest line is the one that runs through A24 highway but the Tiburtina line has more buses. 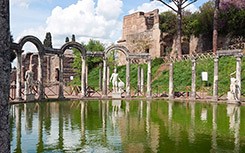 Bus to Villa Adriana. The simplest way to get to Villa D’Este and Villa Adriana with public transportation is to get off at Villa D’Este (Largo Nazioni Unite stop), then take the Cotral bus in the opposite direction from Piazza Garibaldi. Your best bet is to ask the bus driver to let you off the bus at the closest stop to Villa Adriana. Take the same bus at the end of the tour. Get ready for long trips as the route is very traffic congested. The single bus ticket costs 1.30 Euros. The daily ticket costs 8 Euros.

Train. You can take the train from Roma Tiburtina station. The trip lasts about an hour and 20 minutes to get to Tivoli. Ticket price is 2.60 Euros.