The nasoni, the fountains of Rome 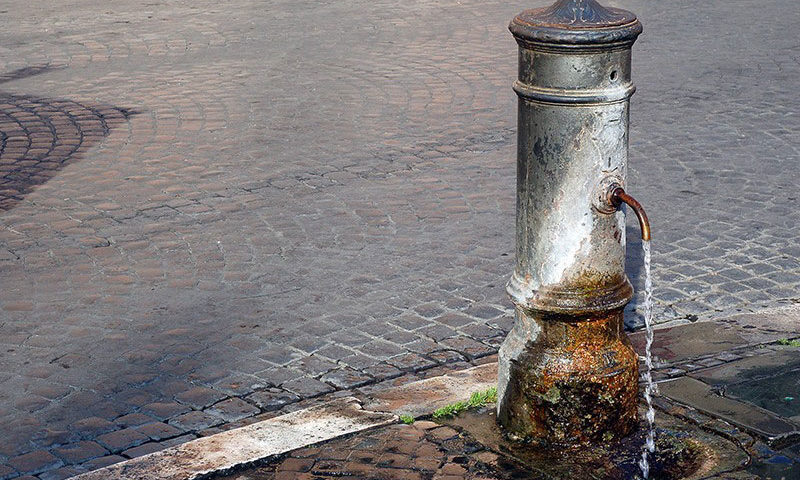 Nasone is the street name, fontanella is the “formal” name. In Rome whoever wants to quench his/her thirst with free water (water of the mayor) has one point of reference: the nasoni. This is the name of the public fountains made of cast iron that are spread all over the city, from downtown to the perimeter of the city. The name comes from the shape of the tap that looks like a big nose.

The water that runs from the nasone is the same water that runs in the homes of the romans. So it’s absolutely drinkable and always cold because the water flows non-stop. The supplier is Acea, public energy company that makes 250 thousand controls on the water every year.

“When the summer thirst dries up our palate, after a walk in the sun, nothing gives us more satisfaction than bending forwards on a humble roman fountain to feel the freshness spring in your throat – writes Marco Lodoli in his Isole. Guida vagabonda di Roma -. Forget long-drinks and sugary pops. Rome’s water has no rivals when it comes to quench your thirst”.

Do as the romans do 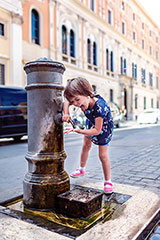 Are you walking around the city and you’re thirsty? Take a look around: sooner or later you will see a nasone. There are about 2500 nasoni (plural of nasone) in the city, 200 in the historical downtown that also features about 90 artistic fountains (the most famous are the Barcaccia at Piazza di Spagna and the small fountain built in the wall in via della Fontanella Borghese).

If you have a cup or a bottle you can fill them up no problem. Otherwise, cover the tap with your finger and let the water spring from the small hole on the near top of the tap and drink comfortably.

In Rome it’s not unusual to see people filling bottles with water at the fountains. Or to see blue plastic tubs sit under the running water. During the summertime it’s not unusual to see watermelons sitting in the plastic tubs under the running water to keep them cold. It happens simply because maybe you’ve invited someone to dinner but you don’t have enough room in your fridge for the watermelon. And of course, nobody even thinks about stealing the watermelon as a sign of respect for that clever “natural fridge”.

The oldest fountains in 1874 had three dragon-shape pipes. Nowadays they only have a smooth one. But you can still find the old-school ones with three taps in Via della Cordonata, not far from the Quirinale, or in Piazza della Rotonda, only a couple of meters away from the more famous fountain of Pantheon.

There’s even a recostruction of the first three-tap nasoni in via delle Tre Cannelle, near Foro Traiano.

The map of the Nasoni

Lately going nasone-hunting has become just as trendy as hunting Pokemon Go. So Acea has posted an interactive map for its users: just punch in the address of where you are and you will find the closest Nasone to your position.

Alternatively, on iTunes you can download for free the Acea app for iPhone, iPad and iPod Touch that includes a map of all the fountains in the historical downtown. Besides finding the route to reach the closest nasone, the app supplies information on momuments and artistic fountains nearby.

Finally, available is a pdf map of the nasoni of the historical downtown made by the department of italianistica of the University of Parma.

The houses of the water

Besides the fountains, recently the Case dell’Acqua (Houses of the water) are popping up in the city. These are points of free supply of still and sparkling water. You can also recharge your cell phone there or your tablet as well as find information of public usefulness on high definition screens. In the booth you can either drink the water or fill up your bottles. The goal is to avoid that 1800 tons of plastic end up polluting the environment. At the same time this process reduces 5000 tons of carbon dioxide given off by production, transportation and disposal of bottles.

The most popular casa dell’acqua is the one installed at Piazza del Colosseo.