Rome by night, evening walks in the most beautiful squares in the city 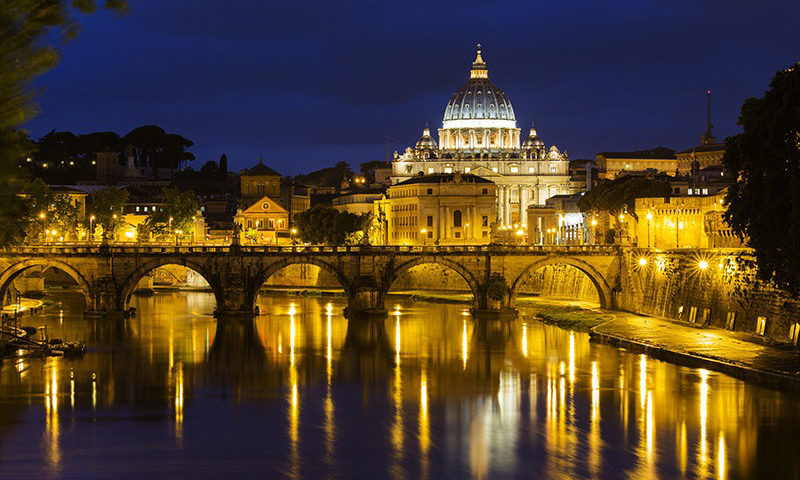 Nothing is more romantic than walking through Rome’s small alleys at night. Romans know this very well as they flood the historical downtown at night to enjoy the several monuments lit by the street lights.

The weather is mild so it’s nice to take a walk outside in basically every time of the year. So don’t miss out and follow romans habits: have a nice and slow dinner, take a walk in the historical downtown and then, if you feel like it, stop for a chat while having ice cream or a drink in Trastevere.

Once the sun has set we advice you to take a walk in the most beautiful squares of the capital city: St. Peter’s and Trastevere, Navona square, Pantheon, Trevi Fountain, Piazza Venezia, Isola Tibertina and the jewish ghetto.

If you feel like it, once you get to Navona square, you can walk a little further and get to Piazza di Spagna to admire the night lights of the Spanish Steps, before walking to Trevi Fountain. It depends on your enthusiasm and stamina.

The starting point of our evening walk is St. Peter’s Basilica. At night it turns into an extremely captivating spot. The new led lighting – wanted by Pope Francesco to save energy and increase safety for the visitors – was designed to model and enhance the architectural features and the color tones. The street lighting was launched in October. It’s made by 132 spotlights that allow visitors to better enjoy the view of the colonnade and the fountain of St.Peter’s.

Move past the St. Peter’s Basilica and walk towards Castel Sant’Angelo (Castle of the Holy Angel) – the second stop of our evening walk – passing through Via della Conciliazione. Before getting to the Castle turn for a moment in the direction of the Basilica to see it from afar. Once you get to the Castle you have two choices: either walk over the Sant’Angelo bridge, with the railing by Bernini and the statues of St. Peter, St. Paul and ten angels, or walk over Umberto I bridge, that connects the Palazzo di Giustizia to Piazza Navona area. This way you have the chance to see the Palazzo di Giustizia (Palace of Justice, seat of the Supreme Court of Cassation), also called the Palazzaccio (the bad Palace) and admire the spectacular view of the St.Peter’s cupola by night.

After walking past Via Zanardelli, get to the Piazza from Via Agonale. There you can check out one of the most famous spots in Rome. Wanted by the Pamphili family, Piazza Navona features the fountain of Nettuno, the fountain of rivers and the fountain of Moro. Those are can’t miss monuments and they are even more fascinating at night. Also to be seen are four beautiful buildings (Palazzo Braschi, Palazzo De Torres, Palazzo Pamphilj and Palazzo Tuccimei).

Once you’re done with Piazza Navona, walk through the Agonale aisle, take a quick glimpse at Palazzo Madama, Headquarters of the Senate, and take Via del Salvatore to reach the Pantheon. If you’re a coffee fanatic, you may want to walk through Piazza Sant’Eustachio and stop at number 82 at Sant’Eustachio il Caffè, open from 8:30 in the morning to 1 am every day. Fridays and Saturdays the closing time is postponed respectively to 1:30 and 2 am.
The Pantheon is one of the many symbols of Rome. It’s famous for its round shape and for the light that comes in from the open ceiling. The exterior of the Pantheon is absolutely mesmerizing at night.

Keep going through Via del Seminario, Via di Pietra and via delle Murate and reach one the truly unmissable stops in an evening walk in Rome: the Trevi Fountain. It’s the biggest fountain in Rome and one of the most famous in the world. Its most memorable time came during the filming of Federico Fellini’s La Dolce Vita in which Anita Ekberg jumps in the fountain and asks Marcello Mastroianni to join her.  Built between 1732 and 1762 and restored in 2015, the Trevi Fountain hangs on one side of the Palazzo Conti di Poli. The tradition says that if you turn on your back to the fountain and throw a coin in the water you are destined to come back to the city. Since 2006 the coins that fall in the tub are given out to charity.
Another traditional tale says that, back when the water was drinkable, young women had the habit of offering a glass of water to their boyfriends when their boyfriends were about to leave town. The women then would break the glass, a gesture that was considered a lucky charm because it meant that her boyfriend would remain faithful to her.

After having thrown your coin in the Fountain, continue your walk towards Via del Corso and keep going straight to Piazza Venezia. It’s the crossroads of four extremely important roads of Rome (via dei Fori Imperiali, Via C. Battisti-via Nazionale, via del Corso, Via del Plebiscito-corso Vittorio e via del Teatro di Marcello). The piazza is located right by the Campidoglio. It’s famous because it features Palazzo del Vittoriano, a monument 81 meter high and 135 meter wide. Its surface is 17000 square meters. It was designed initially as a memento for Victor Emmanuel II. But the building took a different meaning since 1921 because it hosts the remains of the Milite Ignoto (unknown soldier), an italian soldier killed during WWI and that couldn’t be identified because of his wounds. Since then the monument is known as Altare della Patria (Altar of the Fatherland) and it celebrates the unity and freedom of the country. Every night the structure is illuminated and admired by both roman citizens and tourists.

Walk thorugh via del Teatro Marcello and reach via del Portico di Ottavia. Walking through  Lungotevere de’ Cenci you have the chance to see the outside of the synagogue of Rome. Admire the Portico di Ottavia, monumental building of Augusto’s era and get in the old jewish ghetto, one of the oldest in the whole world.

Your evening walk continues going back to Lungotevere de’ Cenci and walking over Ponte Garibaldi. Take the chance to admire isola Tiberina (Tiber Island), the only island in the river Tevere. The island hosts the Fatebenefratelli hospital and the jewish hospital. During the summer it features the Isola del Cinema, a festival that brings great italian and international movies as well as other mundane events.

One spot that you can’t miss throughout your nightly itinerary is Piazza Santa Maria in Trastevere. Once you’ve passed Ponte Garibaldi turn right on Via della Lungaretta and go straight towards piazza di Santa Maria in Trastevere, heart of the neighborhood and nightlife hub. The square features two beautiful monuments: the majestic Basilica of Santa Maria in Trastevere built in the III century by Pope Callisto I and visited by thousands of tourist every day; and the namesake fountain where young people – roman and foreign alike – gather every night.

Wander around the cobblestoned alleys in Trastevere and enjoy the unique vibe that fills the air of the neighborhood, loved by both romans and visitors. The neighborhood is full of narrow alleys, ocher buildings, and facades covered in ivy, lit up by old streetlights.
So let yourself go in the nightlife right in the heart of Rome, full of restaurants and bars. You can stop at Piazza San Calisto and get in the namesake bar to enjoy a hot chocolate or the sambuca with the fly (that is a glass of sambuca with a grain of coffee at the bottom of the glass). Otherwise you can go have a beer at Ma che siete venuti a fa’, a pub dedicated to football that features a great variety of craft beers, or sip on a cocktail in the trendy Freni e frizioni.