Slalom between the sampietrini (cobblestones) 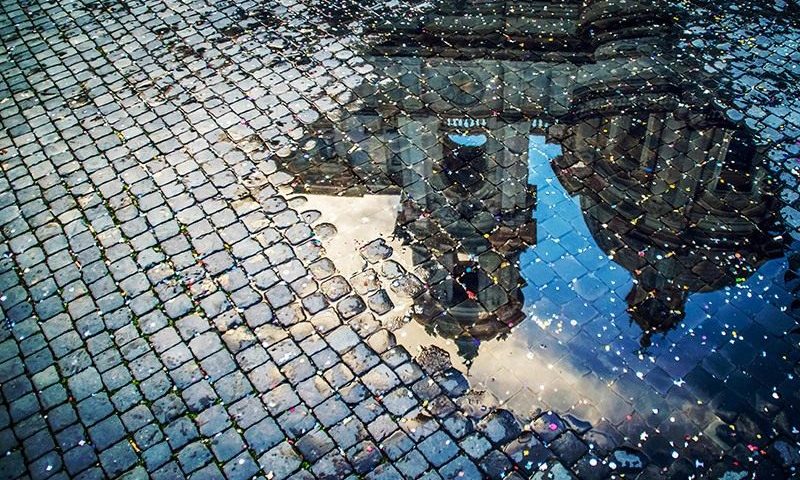 Both a blessing and a curse for romans, the sampietrini make up the pavement of streets and piazzas in the historical downtown including St.Peter’s square. Their presence in the most important spots of the city has made them part of the roman culture and a true symbol of Rome.

The sampietrino is a cubic-shaped or cut pyramide-shaped block extracted from leucitite and flint. The leucitite is an igneous rock featured in the Colli Albani and Monti Ernici, Sabatini and Volsini in Lazio. The flint is a sedimentary rock made mostly by silicon dioxide, very compact and basically immune to atmospheric agents.

The sampietrino is made by breaking the stones at their natural lines of splitting (in order to guarantee the highest point of solidity) to obtain parallelepipeds of different sizes. The most common are of size 12x12x6 cm. The biggest are 12x12x18 cm; the smallest 6×6 cm and you can admire them at piazza Navona.

Once they’re put together, the sampietrini are laid down on a bed of sand and finally they’re beaten to stick nicely to the ground. Thanks to this process the street pavement, in spite of being irregular, is very robust and elastic and lets the ground “breath” thanks to the gaps between one stone and the other.

The origins of the sampietrino

The name sampietrino (or sanpietrino) comes from the fact these blocks were used in 1725 to replace the old damaged pavement of St. Peter’s Square (Piazza San Pietro). Since then these stones were named after San Pietro (St. Peter). The cobblestones were in use already in 1500 to build streets where carriages could run more comfortably and they became very popular in the XVIII century.

Sampietrino has become such a staple in Rome that an ice cream has been dedicated to it. At the Casa del Freddo ice cream parlour at Via Principe Eugenio 65 they invented and patented sanpietrino, semifreddo in different flavours during the summer and baked pastry during the winter.

Every now and then controversy arises in Rome about the presence of the cobblestones in the pavement of the city. Scooter riders complain about the continuous bumping that makes it dangerous to ride the scooter; public administration is very critical of the high maintenance costs that are higher of those of the regular paved roads. Both groups are for the replacement of the cobblestones, at least on the main roads. Furthermore sampietrini are an arduous way for those who wear heeled shoes and, if wet, become very slippery.

In any event they’re a symbol of Rome. For this reason alone, every proposal that has been made for their substitution has seen an uprise of protests by the roman citizens.