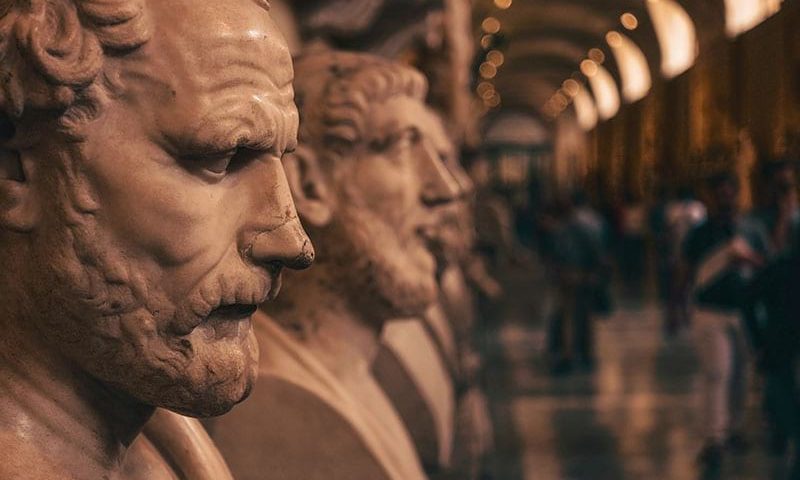 The majority of tourists and the romans as well know and admire the beauty and the majesty of the eternal city that we can actually see on the surface, on top of the cobblestones. However many treasures buried and hidden underground are not as explored as the “outer” Rome.

So here’s a list of spots that embrace the magic of the undeground Rome. Spots that take you to an ancient world rich of suggestion capable of re-enacting history,

The Auditorium of Mecenate, located in the Esquilino neighborhood and built in the 1st century B.C. on the outside looks like a run-of-the-mill building. However when you walk the flight of steps an amazing ancient roman architecture shows up right before your surprised eyes. As you move towards the back of the building there are six recess’s on each side. On the halfround apse there are five more recess’s. Everything is decorated and adorned by paintings of Dionysian scenes and miniaturist gardens that take you into a virtual magnificent and lush underground park.

Discovered completely intact in 1831, the colombario di Pomponio Hylas (Ila) is a roman colombarium built in the first century a.c. on Via Appia. You access it via a steep stairway in Parco degli Scipioni. The several recess’s dug in the walls were used to lay down the ashes of the dead. More precisely the recess right in front of the entrance decorated by limestone, was destined to host the urn of Pomponio and his Liberta, the two spouses quoted on the writing on the mosaic panel.

The walls and the vault are decorated by shoots of vine, pictures of birds and cupids as well as Dionysisu, Orfeus, Chitone, Achilles and Cerberus. All the figures hold a symbolic value, most of them connected to the several destinies of the soul in the afterlife and kind of show the way to reach everlasting happiness.

The Domus Aurea, the most lavish of the imperial dwellings built by Nerone, spreads out from Palatino to Colle Oppio. The residential complex included inside an artificial lake, woods, vineyards, gardens and rich treasures. As a matter of fact the place gets its name from the golden decoration and the diamonds that embellished the vaults. Another feature is the octagonal chamber located between the two courtyards that spun non stop, day and night.

The catacombs of San Callisto are the oldest, the most important, and better preserved catacombs of Via Appia. Many martyrs, popes and christians are buried in there. The wide galleries, that feature several recess’s, lead to five rooms called “the cubicles of the sacraments”, which are basically small family mausoleums. The rooms are famous for their frescos of the IIIrd century, that represent symbolically the sacraments of baptism and eucharist. Very evocative are the Santa Cecilia’s crypt with its V-VI century paintings and the Crypt of the Popes also known as “small Vatican”.

20-metre deep under the basilica di San Clemente, in the valley between Celio and Esquilino, stands the archeological complex of the old early Christian Church where a II century roman Mithraeum is preserved. The sanctuary central chamber features along the side walls two long counters where the worshipper used to sit. At the end of the room, inside a recess, there is a representation of Mithra, joined by his assistants carrying torches, in the act of killing the bull.

Accompanied by Piero Angela’s voice and with a competent virtual reenactment, lighting, sound effects and beamings, you can see rising from the ashes ancient architectures, dining rooms, thermal systems, kitchens, and decor of the patrician domus’s of the imperial age. The roman domus’s of Palazzo Valentini long ago belonged to senators and powerful families. Nowadays they are a sight to be seen : mosaics, finely decorated walls, polychrome floors, and many other fascinating remains that make you go back in a luxurious lifetime of another era.

More recently built and discovered are Mussolini’s bunkers: the shelter in the central room of the basement of Casino Nobile; the cellar/shelter and the most important antiaircraft bunker in italy built between 1942 and 1943 in the private residence of Villa Torlonia.

The latter is unfinished. It was dug six meter deep. It features a layout that looks like a cross with galleries protected by a cover of reinforced 4-meter thick concrete pad. The shelters and the bunkers are all equipped with original equipment of that era and descriptive material that lets you get to know more about this site of great historical magnitude.

Rome’s underground doesn’t end here. There are maybe other sites that haven’t been discovered yet. So hopefully soon we can update this piece with new discoveries of this amazing and ever surprising city.